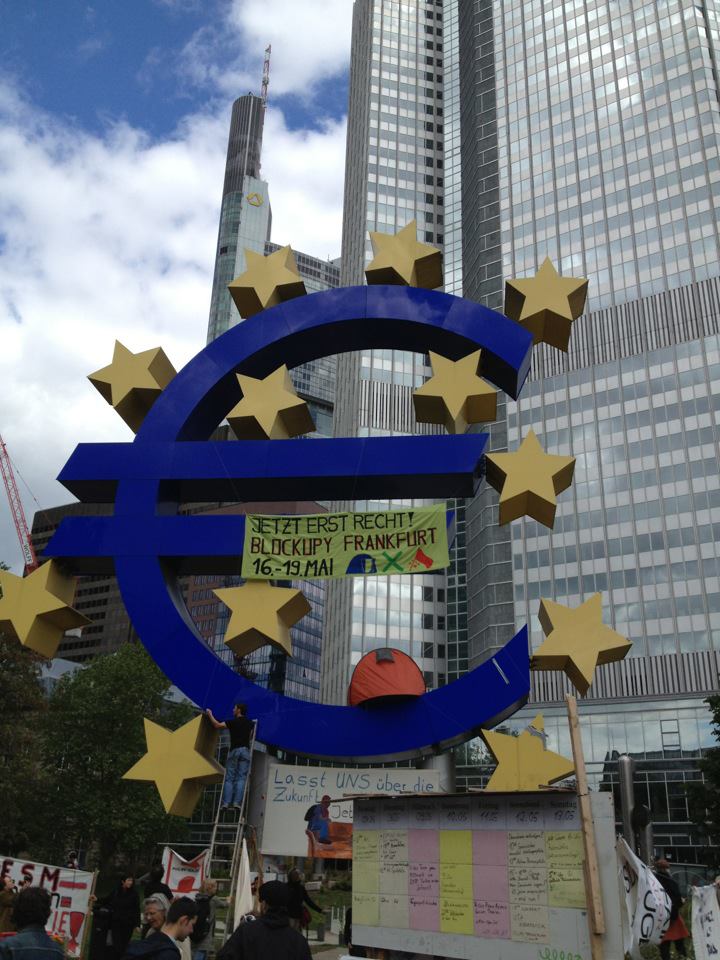 There has been quite some debate over whether the Occupy movement, despite being famously open and unspecific about its political aims, is fundamentally based on an anti-capitalist agenda. Some have argued against this assumption, claiming Occupy was critical of capitalism but didn’t share the believe that there was something fundamentally wrong with with it. This might be read as an adaptation of Graham Gibson’s argument about the dangers of fetichising capitalism in anti-capitalist politics, a valid critique.
It might also be, rather more worringly, an attempt by proponents of capital’s plan B to use Occupy for their pursuit of ‘capitalism light’. Some appreciation of critical approaches to capitalism to save it: See what George Caffentzis wrote in a recent comment:

As [Obama] wrote in his campaign book, The Audacity of Hope in 2006, neoliberalism (what the Bush Administration ideologues called ‘the Ownership Society’) was leading to a political catastrophe for capitalism in the US by creating harsh class divisions, an uncompetitive working class, and a corrupt and irresponsible capitalist class. Obama’s answer to US capitalism’s ills was and is similar to Sach’s answer for Africa: communal actions and institutions must be tolerated in order to make a functioning capitalism possible.

The uptake of Occupy in Germany had been relatively late and never particularily strong. Blockupy Frankfurt was a concerted attempt to take Occupy further and make it into a strong antagonistic and anti-capitalist statement. In particular activists targeted the German financial capital and her banks, including the European Central Bank (ECB) in protest over the austerity measures forced upon Euro member countries like Greece, Italy and Spain. As broad coalition was forged on the basis of a  very considerate action consenus, which allowed anti- and alter-capitalist to work together.

In the end, the protest was blocked: City of Frankfurt administration banned all planned actions apart from one march which took place on Saturday with 30,000 participants. The German constitutional court upheld the bans on protest, causing surprisingly little concern.

We’ve wished that there would have been more tents on the squares, for a longer period. We had prepared a large range of asambleas and meetings, opportunities to have a free exchange and free debates. The violence of the bans and the violence of those who executed them, kept us from doing so.

But many participants will also agree with the following note

We will not be intimidated. We will not be crushed. And most certainly, we will not back down. And even if they crack down on us again — which they will — let it be known that our aims have already been achieved: the financial epicenter of eurocapitalism is completely blocked. And the authorities were kind enough to do it for us.

Now it’s time to up the ante. Authorities in the West seem to be increasingly happy to undermine democracy to defend capitalism. Little do they seem to care whether protesters are anti-capitalist or alter-capitalist. These are signs of weakness: The results of the weekend in Frankfurt: Blockupy 1:Authorities 0