Activist Exchanges: the Occupation of Squares and the Squatting of Buildings

Posted on December 9, 2011 by protestcamp
Over the past two months of the Occupy Movement we have seen protesters move from reclaiming city squares to reclaiming foreclosed homes and disused buildings. In Spain, similar actions have been taking place for months. Activist-academics Miguel A. Martínez and Ángela García of Universidad Complutense de Madrid participate in and research the ‘activist exchanges’ occurring between the M15 movement in Spain and the country’s existing squatters’ networks and social centres.

protestcamps.org approached them for a guest blog post to tell us more about their ongoing project:

“Our research is based on our own participant observation in most of the events of this period in the city of Madrid. To find out more, we conducted 21 semi-structures interviews with squatters and M15 activists. We also analysed media documents, alternative media news and messages which were spread through Internet platforms–particularly via social media sites including weblogs, Facebook, Twitter and Youtube. 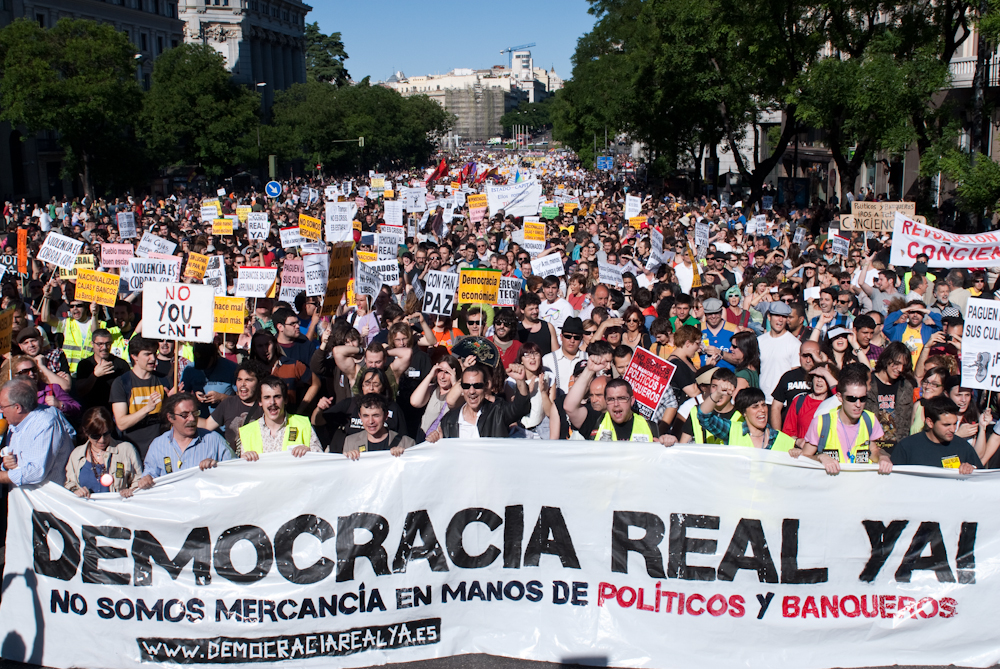 The M15 movement in Spain has responded to the financial crisis and the neoliberal policies with a sudden and profound social mobilisation for the past 7 months (May-December 2011). While it arises from previous movements including the alter-globalisation movement 1994-2002, the 2003 anti-war movement, anti-conservative government M14 mass protests in 2004, and pro-housing campaigns for 2006-2010, this is the first time that a precarious multitude takes the squares, the streets and the neighbourhoods for such a long lasting period, through an innovative autonomous organisation and with a transnational scope.

Our explanation of this process of convergence rests mainly in what we call the ‘cumulative chains of activist exchanges’ that took place between the three aspects of the process (squat participants in M15, existing social centre networks and new activists) as they reinforced each other. The structural equivalence of the occupied camps and the squatted social centres, in terms of assemblies, self-management and social disobedience, sparked the mutual collaboration. Camps also turned into strategic ends. Utilising and developing forms of  direct democracy,the M15 movement went beyond its original function as a powerful repertoire of protest, displaying a similar mode of governance as tends to be performed in squatted social centres.

Squatting gained legitimacy within the M15 movement due to protesters’ initial collaborations, as well as to the increasing success of the Stop Foreclosures campaign. The M15 movement encouraged new activists to self-organise in a number of different groups: some of went to work in preexisting squatted social centres, while some others started to squat new houses and social centres. On the one hand, this mixture slightly reduced the radical and anti-systemic discourse of squatting. On the other, the anti-speculation discourse has been incorporated into an anti-crisis one, wherein squatting is justified by the extreme needs of increasing numbers of the population.

The impressive wave of new squats opened between September and November, 2011 also took advantage of the political opportunity structures: low level of repression and temporary divide (and de-legitimation) of power elites around the electoral eve (November 20th), in particular. Since January 2011 the international context of European and North African uprisings (and political and economic crisis as well) have effected demonstration and contamination transnationally, in part through the instant and plural communication enabled by Internet networks. This high speed, multi-vocal communicative environment was also developed by the M15 movement trough their own cybernetic means and platforms. This allowed the new mobilised multitude to frame the continuous grievances that emerged during these seven months (repression, evictions, cuts in public services, reform of the Constitution in order to pay national debts, etc.) using their own communicative platforms.

The camps, the popular assemblies and the squats had the virtue of getting people in touch regularly. This meant that the self-organisation and agency of groups had a reliable socio-spatial ground from which their hybrid urban and macro-political movement could challenge urban life based on collective and private consumption.”