Posted on November 9, 2011 by protestcamp

The issue of spatiality for protest camps is a big one, especially for someone who is not trained as a Geographer.  As my work usually deals with media representations, this is a daunting task. While media representation is a significant aspect of protest camps, and indeed a space which is struggled over, it isn’t the focus today. Instead, the focus rests on the physical location which often forms its cornerstone. An understanding of space is key to making sense of the dynamics of a protest camp.Protest camps are often defined by their physical location and their location shapes how a camp and its occupiers are perceived by the public, how they are presented in the media and how politicians and authorities react to them. Yet while all of these acts of camping are protests in themselves, I would suggest from our research that there are four (4) types of locations protest camps usually take.  These categories are, of course, a work in progress.

I.  Camps at physical sites under threat Protest camps may be built upon contested physical areas, such as the proposed site for building a new road or oil pipeline. In such cases, the presence of the protest camp is a physical and direct intervention on a site which is perceived by those camping as at risk; at risk from takeover, demolition, destruction or eviction. The act of camping on site physically prevents, if only temporarily, the contentious action from happening.  This type of protest camp commonly sees protesters occupying trees set for clearing, as with the Newbury Bypass and Minehaha Free State anti-roads camps. Other camps of this nature see activists construct barriers and dwellings in the pathway of proposed construction as with the No TAV campaign in Italy. A case could also be made that the recent Dale Farm protest camp would fall under this banner as well. 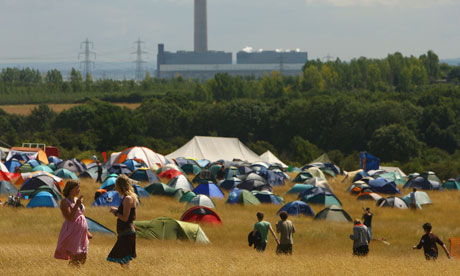 While this first set of camps take place on physical locations under threat, other camps directly target sites which are seen as threats. This was the case, for example, with Greenham  Common, where protesters camped out around the perimeter of a military base storing nuclear cruise missiles. Other peace camps, spread across four continents, followed suit with camps established outside of military bases and weapons manufacturing plants. In both instances of sites under threat and sites as threats, the physical location of these types of protest camps directs media attention towards the site as a contested area. This enables, or at the very least sustains, public dialogue and political pressure around the relevant issues.  Some Climate Camps function in this way, selecting a specific site of ‘carbon criminality’ that are both immediate targets of action and stand in for larger problems of airport expansion, coal power and oil-based economies.

Another set of protest camps are those established as sites of resistance or counter-summits to large international gatherings of global elites. Protest camps built around the Global Justice Movement took place on sites neighbouring meetings held by the WTO, G8, G20, FTAA and similar meetings. These camps sought to provide an open and inclusive public space to converge, share ideas, enact alternatives and challenge corporate globalisation. Thus the camps were not just spaces to plan protests but were protests themselves with their open, self-organized and good-spirited nature standing in sharp visual contrast to the ring fences and extensive militarization that accompanied such summits.

Over time the Global Justice camps became a ritualistic form of protest and often plans for the camp would begin before the location of a summit was announced. For example, planning for the 2005 Gleneagles G8 Summit began in fall 2003. Dissent! Network activists steadily developed the HoriZone EcoVillage for the Summit even before the location of the G8 was announced. Activists only knew the G8 would be in the UK. Once Gleneagles was announced as the venue, the Dissent! protest network then began exploring options for the camp to take place. The salient point is, the contested site was not a tethered location such as a military base, but was what Geographer Paul Routledge has called a ‘convergence space’; an idea that activists can organise around which was then given material form through announcing the physical location. This means that whereas for some protest camps the physical place of the camp creates the ‘convergence space’, for others, and particularly those with symbolic legacies such as summit mobilisations, this relationship is reversed.  Here, the convergence space is imagined prior to the physical creation of the camp.

Many protest camps from peace camps at military bases to climate camps at power stations have both a particular place-based political target and a broader symbolic one. The symbolic element of protest camp sites increases when protests are around issues such as consumer capitalism or greed that are so vast and hard to concretise. In these cases protesters pick sites which are seen to embody, and be a cause of, the issues at hand. This is perhaps best seen in the current example of Public Square occupations in Tahrir, Madrid, Greece and Israel/Palestine, as well as with the Occupy Wall Street movement.  Taking the square (or the park) in an area of symbolic value or taking a public space and then assigning symbolic value to it. Both the original Occupy Wall Street camp at Zuccotti Park and the Occupy London (Occupy LSX) selected sites for their proximity to the financial centres of New York and London.   Occupy Toronto also picked a public park – St James Park – and despite its close proximity to the financial district of Toronto, it is steeped in Democratic history.  Given that the Occupy Wall Street movement has a broad focus on inequalities caused by the state of hyper consumer capitalism and has more specific concerns around the financial sector, situating protest camps in close proximity to financial districts provides a physical and symbolic or visual challenge to business as usual.