Brought students from my uni. They were full of questions, the kinds of questions that make you smile and stumble, rambling over words. Where there is at once so many points to make and a beauty in the question being impossible to answer alone. And it makes your skin tingle the same way all the other encounters here do. Your heart flips sideways as it expands in attempts to understand more and more: 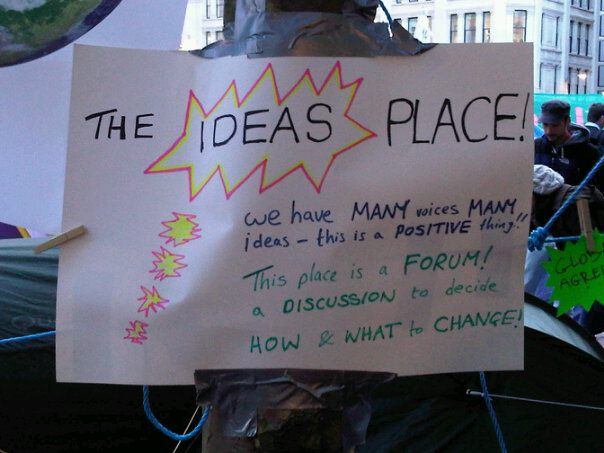 A banker fired from Lloyds leading a campaign against the company for wrongful termination and ethics violations. A first time protester who just came to check it out and went home for a tent. A woman who spent ten years in prison in Iran during the revolution who tears down a sign I’ve been asked to make about supporting the Cathedral. A man carrying a box of giant letters, a 30 metre clothes line and pegs to make a movable sign ‘like magnetic poetry.’ A composer from Hollywood with huge spiky hair. Two green activists trying to figure out what counts as contaminated rubbish for the recycling bin. A man in his 80s kneeling down to say ‘thank you for being here.’ A man in his 40s on a rusty dutch bike remembering his past self queued up at Selfridges for the next big thing. And yes, there may be ‘the usual suspects’ here as the media moans, but these are not single issue-single race-single religion-single class-single age range crowds. And yes, there are people left out. There are causes lacking signs and spokespeople. But there is an opennes to faults, to growing, to constantly becoming that I have never been a part of before. There is a righteousness that is laced in compassion, a rage that is woven through with patience. As Jesse Cohn said of his visit to Occupy St. Louis, folks here are just “so good at listening to one another.”