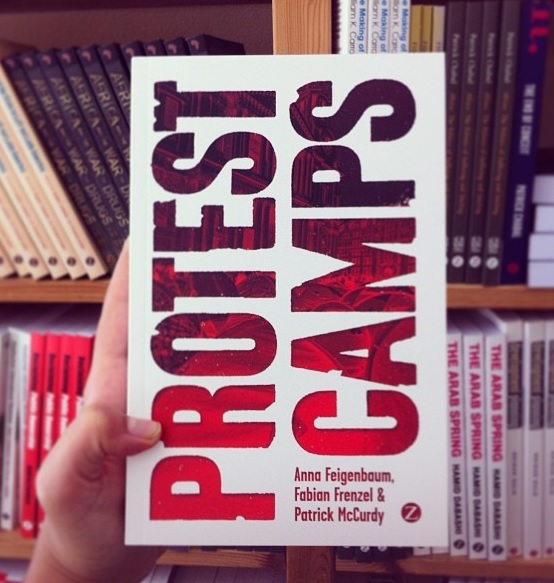 Hot off the press, Protest Camps hits indie bookshop and digital shelves worldwide on October 10th, 2013. To celebrate the publication of our book, we’re taking part in a number of events. From bookfair talks to festival workshops, Protest Camps’ Anna Feigebaum, Fabian Frenzel and Patrick McCurdy will be visiting cities across the UK and beyond:

Available at local indie booksellers and for online order order in the UK & in the US.
For more on the broader Protest Camps Research Network visit protestcamps.org
Follow us on twitter @protestcamps

To host a Protest Camps event, explore possibilities for collaboration, or co-design a workshop with us, get in touch!

About Protest Camps the book
From Tahrir Square to Occupy, from the Red Shirts in Thailand to the Teachers in Oaxaca, protest camps are a highly visible feature of social movements’ activism across the world. They are spaces where people come together to imagine alternative worlds and articulate contentious politics, often in confrontation with the state. Drawing on over 50 different protest camps from around the world over the past 50 years, this book offers a ground-breaking and detailed investigation into protest camps from a global perspective – a story that, until now, has remained untold.

Taking the reader on a journey across different cultural, political and geographical landscapes of protest, and drawing on a wealth of original interview material, the authors demonstrate that protest camps are unique spaces in which activists can enact radical and often experiential forms of democratic politics.

‘The phenomenon of protest camps is finally given the attention it deserves. With an international remit and a huge range of historical and contemporary examples, Feigenbaum, Frenzel and McCurdy provide a theoretically robust yet also highly readable and inspiring investigation of what protest camps are, do, achieve and challenge. What is more it is packed full of great photographs, cartoons and diagrams.’
– Dr Jenny Pickerill, Reader in Environmental Geography, University of Leicester

‘Much has been written about recent protests as digital networks, but too little about the physical process of continuously occupying significant space. Feigenbaum, Frenzel and McCurdy’s wonderful book brings a fresh perspective to our understanding of contemporary political action, connecting to the history of occupations and offering smart conceptual tools for analysing both recent and historical events in all their richness, messiness and hidden order. A fine achievement.’
– Nick Couldry, London School of Economics and Political Science

‘An exciting, engaging and energizing book, Protest Camps is required reading for activists and academics interested in the history, politics and practice of the occupation of public space as a creative form of extra-parliamentary action.’
-Sasha Roseneil, author of Disarming Patriarchy: feminism and political action at Greenham, Professor of Sociology and Social Theory, Birkbeck University of London.

‘Analysing the global history and radical infrastructures of protest camps this book provides a captivating cartography that helps heal the chasm between how we live our everyday life and what our political ideas are, how we protest against the old world whilst proposing new ones. Best read (and discussed) around a (protest) camp fire.’
-John Jordan, artist, activist and co-founder of the direct action protest movement ‘Reclaim the Streets’.