Several members of the protest camps research collective converged in L.A. this April for the Annual Conference of the Association of American Geographers (AAG). It was an opportunity not only to present and discuss our research in the conference itself, but to catch up with and meet others involved in radical geographical projects. It also gave us a chance to spend time with local activists, and generally explore the dizzying metropolis that was hosting us. 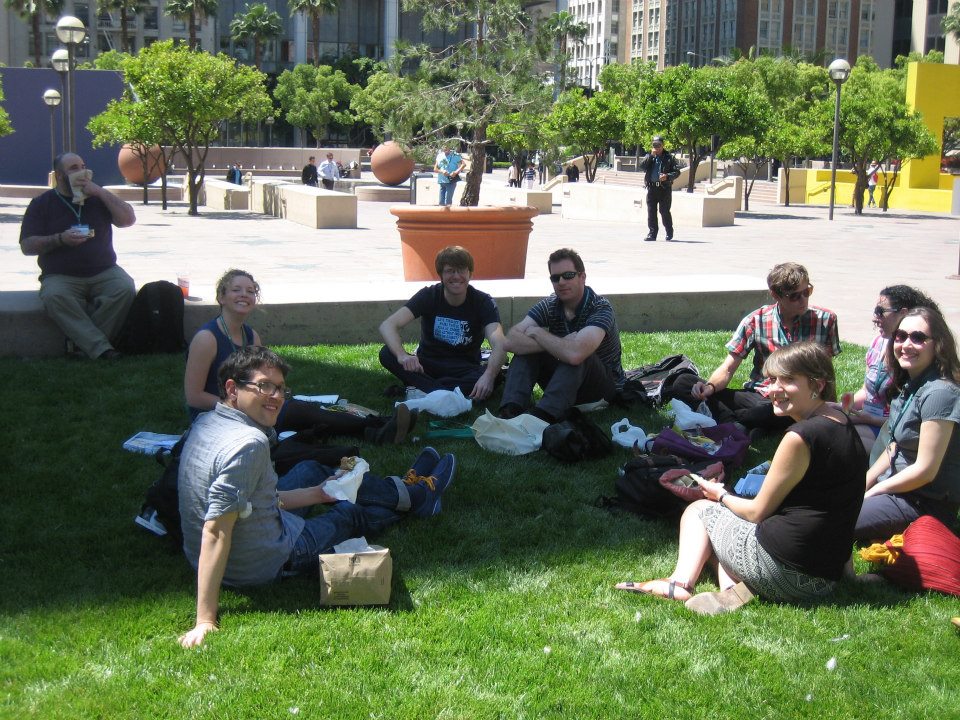 Lunchtime at the AAG with the Subconference

Many of us spent the first day with the Subconference, a loose collective that has popped up on the fringe of the AAG for the last 3 years, seeking to facilitate a space for exchanges, solidarity, and creative action. This year we produced a small zine, highlighting some of the best of, and worse of, the conference. It also contained a critical survey of the AAG with hopes of bringing other people’s ideas for improving the (sub)conference forward in future years. Day 2 hosted a 6 hours session on action research and activist scholarship in which protest camp members joined an impressive selection of radical geographers talking about their research projects over the last four decades.

Day 3 saw a double session on “Uprising Geographies”, hosted by protest camps’ Adam Ramadam and Sara Fregonese, and with talks by Anna Feigenbaum and Fabian Frenzel on their fascinating “campfire chats project”, and Sam Halvorsen on Occupy London. Meanwhile, there were talks by protest camps members Anja Kanngieser on the radical political economies of communication, and Christian Scholl on controlling transnational dissent.

These talks represent just a fraction of the sessions that consisted of geographers working on radical themes: from anarchism to feminism, queer geographies to race and black Marxism, as well as an array of sessions on social justice, hope and new social movements. The presence of the protest camps collective at the AAG is part of a renewed optimism that geographers are opening up spaces for thinking about creating other worlds. The popularity of the subconference suggests that there is also an increased determination to practice what we are discussing – “walking the talk” as the action research sessions described it. As we walk the talk together, disciplinary boundaries are increasingly broken down and the protest camps collective is a good example a transdisciplanry network of radical researchers.

The final day for most of the collective was spent with The Public School, an autonomous teaching collective based in LA’s china town. They hosted a session called “Radical Geographers and Anticapitalist Politics: Dispatches on research and action” in which we were able to trace out diverse continuities between the work of protest camps researchers and fascinating projects including Mara Ferreri’s countermapping, Lisa Hirmer’s experimental artwork, and Etienne Turpin’s architectural collaborations in South-East Asia.

As the protest camp network keeps expanding and experimenting with ways of working together, we encourage others to join in. Forming inter-disciplinary, transnational alliances with those who share similar interests and aims helps us build new spaces for radical academic research.