Hope at the Heart of Praxis: A Round-up of the Creating Worlds Workshop

On Monday January 14, 2013 members of the Protest Camp Research Collective gathered together for the Creating Worlds Workshop with others interested in place-based resistance and the making of alternative worlds. We asked activist-researcher Sam Halvorsen to reflect on the day’s events:

Creating Alternative Worlds, the latest day-long workshop organised by the Protest Camps Research Collective, took place on January 14th at Royal Holloway in London. It brought together a group of around 30 researchers to explore the diverse geographies of the alternative worlds we are constructing within and beyond capitalism. The day itself was split into three sessions focusing on the spatialities of affect, organisation, and politics.

The first session on the spatiality of affect was probably the most wide ranging discussion, taking us from the ‘shared emotionalities’ of the mundane encounters explored by Kye Askins, to Harriet Hawkin’s emphasis on the importance of the production of atmospherics by artists to the co-joining of affect and space, and the unexpected outcomes of the affective spaces created by street performers observed in Paul Simpson’s work. The ensuing discussion carried on by exploring the diverse ways in which we create affective spaces and how these may resonate, circulate and amplify, whilst suggesting a need to be alert to how these spaces can resist capture and be sustained.

The second session explored the spatialites of organisation, with Nazima Kadir focusing on the autonomous spaces of squats in Amsterdam and providing a fascinating ethnography of the ways in which hierarchies operate in communities that reject authority. Jane Wills then talked about the importance of ‘readiness’ and the need for social movements to work with and build infrastructures, suggesting that the buzz around ‘self-organisation’ is perhaps nothing extraordinary as it is already part of our everyday repertoires. Finally Tim Cresswell discussed the centrality of mobility to organisation, and the need to recognise the roles of diverse prosthetics to being mobile. The discussion moved between topics such as the difficulties collectives face in acknowledging their own authorities, how framing can play a key role in the success of social movements, and a general agreement on the importance of reflexivity (which often takes place through informal spaces of ‘gossip’) to movements’ organisation.

The final session was the most focused on place-based protests, considering the relationship between spatiality and politics in camps. Uri Gordon begun by mapping out the Israeli tent protests of 2011, suggesting a ‘core-periphery’ relationship between the hub of Tel Aviv and the often more antagonistic, and smaller, camps further afield, a relationship which was also re-produced at other scales. Adam Ramadan explored the continuities between concentration camps, refugee camps, and protest camps, suggesting they are all exceptional, tactical and temporary. Finally, Andy Davies reminded us of an often ignored component to the ‘year of uprisings’ in 2011, the anti-corruption Anna Hazare movement in India, and the importance of fasting as a type of politics. The discussion picked up on the questions of exceptionality and temporality of camps, as well as exploring the trap of falling into the fetish of the camp as the only political expression of a movement, whilst also acknowledging the vital roles that protest camps have played both historically and to this day. 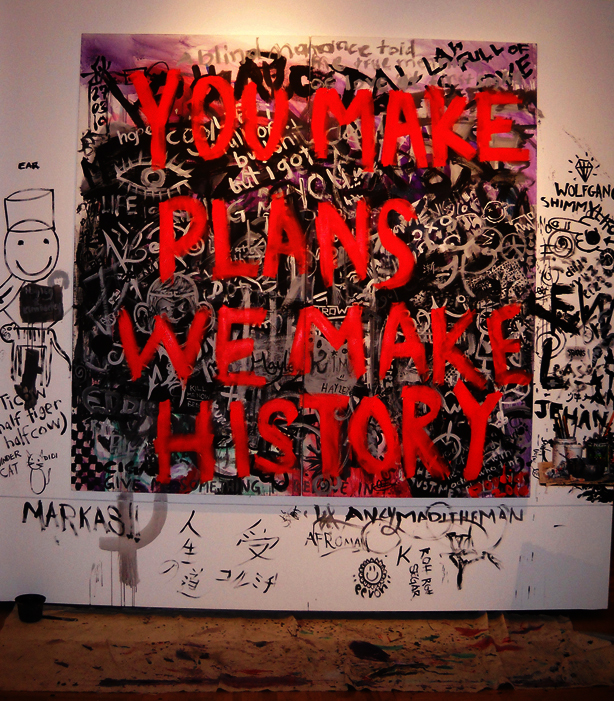 Beyond the great diversity of ideas that came out the day’s discussions, the most importance aspect from my perspective was the coming together of a group of researchers, all of whom are committed in various ways to bringing their politics and activisms together with their research. As a PhD student researching within and alongside the Occupy movement, I often find workshops and conferences to be too centred on highly abstract discussions amongst a small and privileged group of academics. The Protest Camps Research Collective is part of many different attempts to create alternative worlds inside as well as outside the university.

The opening remarks of Jenny Pickerill and workshop organiser Anna Kanngieser that they wanted this session to be as informal as possible, that speakers should try and avoid overly complex language and their insistence that ‘no question is a stupid question’ was a refreshing and comforting start. The smiles that bounced around the room as eyes peered through the windows at the falling snow outside also brought the first session on affect down to earth and helped to create a lighter atmosphere. I agreed with the many reminders that much needs to be done to bring our alternative worlds into the walls of the university. In particular, Kye Askins commented that we have gotten very good at thinking about emotions and affect as researchers, but less good at practising them in our workplaces.

Our ability at the workshop to discuss a wide range of themes across numerous disciplines and, importantly, engage with a diversity of politics helped us to move ‘beyond ideology’, as Jane Wills discussed, towards a more grounded encounter of being. Finally, I felt a general sense of the possibilities and potentialities from within the spatialities discussed throughout the day, which resonated well with Jenny Pickerill’s opening comments on the importance of placing hope at the centre of our praxis.

Overall, it was a highly enjoyable and creative day. I hope to see many more like this soon!

To stay connected to the Protest Camp Research Collective’s events and speaking engagements, check out http://protestcamps.org/events and follow @protestcamps on twitter.

3 Responses to Hope at the Heart of Praxis: A Round-up of the Creating Worlds Workshop